Next step - goalkeepers.
No comments:

To conclude our little foray into h4X0R1ng, we might as well write a bit of code to output the data we've gathered so we go from this:

(yes, this is the Arsenal team in the original game format, with the hex editor translations on the right - big help, eh?)
to this:

Having already done the hard part to rip the data, the code for saving as plain text is trivial:

Here's how a non l33t h4X0R might knock up a quick program to get the data out of the sensi dat files. It could be optimized, cleaned up, and generally written much better. But it gets the job done and that's all we care about for a one-shot program!

Alright that's a bit of an over statement. But I remember back in the day, I must have been 15 years old max, with an interest in computers but absolutely no programming knowledge whatsoever. I almost wet my pants when I got an Amiga coverdisk with "Easy Amos" on it. It was supposed to let you make your own games. At that age, I couldn't get anywhere with it. What a disappointment.

It was a minor victory just to FIND the Sensible Soccer data files. What a disappointment then (after struggling just to OPEN the files) to be presented with something like this:

How the fuck was I supposed to update Liverpool with their exciting new signings, Sean Dundee and Bjorn Kvarme?! What a disappointment!

Fast forward a couple of years and the very beginnings of my education in computers. I was in the right circles, speaking to the right people. A HEX EDITOR, THAT'S WHAT THE FUCK I NEEDED!

Finally I'd be able to update the pool to their rightful glory with wonder signings such as Djimi Traore and Bernard Diomede!

So I cracked open my shiny new hex editor, loaded in the file, and...

Alright, at least there's something readable on the right, but this is just a dick tease! Maybe I could change a few names, have the beast Biscan playing for Liverpool, but he'd have all the stats of whoever he replaced. Ballix. And how can I change the stats? How can I give Heskey 10 out of 10 for "falling over"? How can I give Michael Owen -1 for loyalty? Robbie Fowler 4,000,000 for finishing? Where IS all this stuff ?!?! WHAT A DISAPPOINTMENT!

Anyway, I went on my merry way, learning my programming trade and only now, thanks to this Senseless Soccer project, have I rediscovered these dat files. Well guess what bitches. NOW I FINALLY  have the knowhow to make those dat files sing to my own damn tune.

There is an online community keeping these data files up to date, which will be pretty cool for Senseless Soccer, but for now, JUST BECAUSE I CAN, here's some select tidbits ripped from the original SWOS amiga game: (attributes out of 15) - see next post for the code!

Note: As far as I know, the applied skill values in the game range from 1-7. A value over 7 signifies that this skill shows up as one of the 3 top skills for that player but in the actual gameplay, 7 is deducted to give it a val in the range 1-7.

So for example, Mark Wright has Passing, Heading and Tackling (PHT) as his 3 key skills but his passing rating of 12 is actually 5 out of 7.

The following screenshot is how this shows up in the game (couldn't find Liverpool team, sorry). Tony Adams has HTP as his key skills - heading, tackling and passing!

A note on docs

If you are reasonably diligent in commenting your code using the doxygen markup convention, it can spit out some pretty meaningful and helpful documentation for you.

Here's an example of some documentation for the camera class. Everything is automatically generated, even the diagrams. 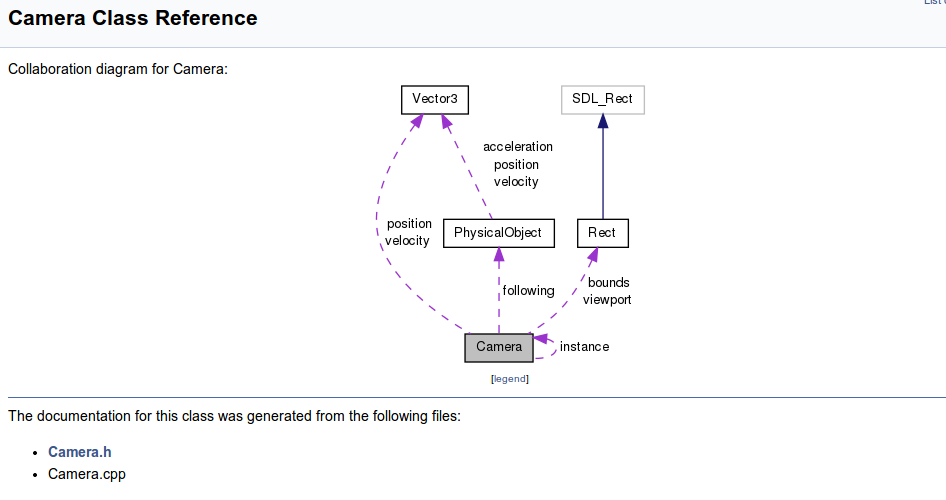 This gives you a good overview of the capabilities of the camera, and an indication of where you might want to go to make changes.

It has rectangles to represent its viewport (visible area) and bounds (total world space).

The diagram also (correctly) indicates that the camera is a singleton class with an instance pointer to itself. I don't really like singletons so we'll be changing that. Besides, in this case a singleton isn't a good solution, since it's entirely logical to have more than one camera.

Pretty reasonable and informative!
No comments: