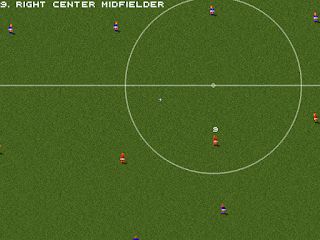 So after a bit of a break for the xmas hols and an extra-busy month in work, development is back underway for Senseless! Yay!

To ease use back in, we're doing a bit of refactoring. Right now the player states are controlled in a top-down hierarchy, so the team state sends a message to the players to tell them what to do.

This is a bit (very) messy because it really makes the state machine too complicated to manage. Instead of each individual state strictly controlling it's behavior, it can be randomly "messaged" to change from outside. We don't like this.

Much better is a bottom-up mechanism. So the player "surveys" his environment and decides for himself what to do.

Instead of continuously checking the match state, later we might want to turn this into an "observer" pattern. Normally I don't like to overload on patterns but here I think it makes a lot of sense. The player "observes" the state of the match. Seems pretty intuitive.

Just a reminder, the state of the game: (the flickering is only in the video cap. Honest!)